Christopher Klavon is a Jackson, MI, native who was badly burned in a drunk driving accident 22 years ago. A drunk man broadsided his family's vehicle on their way to a Memorial Day parade. Over 75% of Klavon's body is covered in burn scars. He is missing his right ear and several fingers. But those things don't compare to what he really lost that day... Klavon's high school sweetheart and wife of 11 years was killed upon impact. After three grueling months in the hospital fighting to survive, Klavon was faced with the challenge of raising his four young children along with continuing his own physical healing.

Klavon has never let his burns define who he is. Today, he uses his story and experiences to help others. Klavon speaks to first-time offender drunk drivers and started Great Lakes Burn Camp, a summer camp for young burn survivors near Kalamazoo.

"I do know that everything happens for a reason," Klavon says. "The only thing you can control is how you think and react to things in life."

Beyond the Burns received 5th place in the national Hearst Photojournalism Awards Photo II competition in 2013. 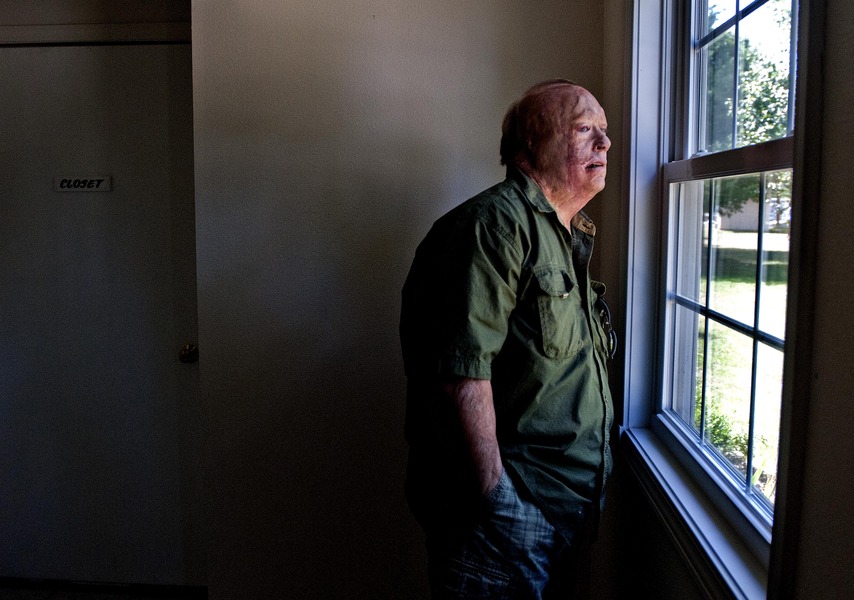 Chistopher Klavon, 53, of Jackson, MI, is a burn survivor. His family van, with his wife and four kids inside, was broadsided by a drunk driver on May 31, 1991. Klavon's wife and mother of their four children, Kay, died on impact. Klavon was trapped in the burning vehicle and sustained severe burns over 75% of his body. Despite his injuries, Klavon uses his experiences to help others and save lives. 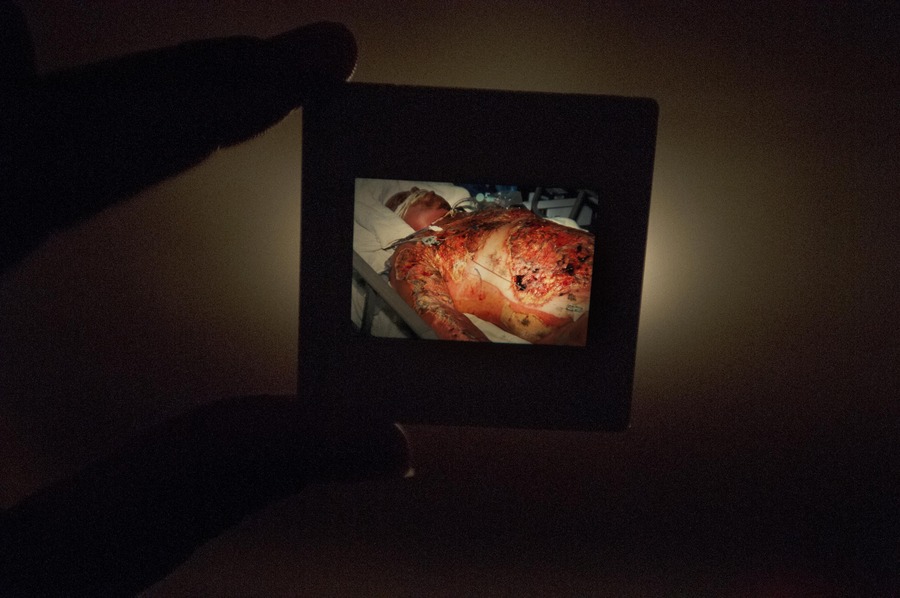 Klavon holds a slide of a photo taken right after his accident. Seventy five percent of his body was severely burned. Doctors say it is a miracle he survived such a horrifying accident. 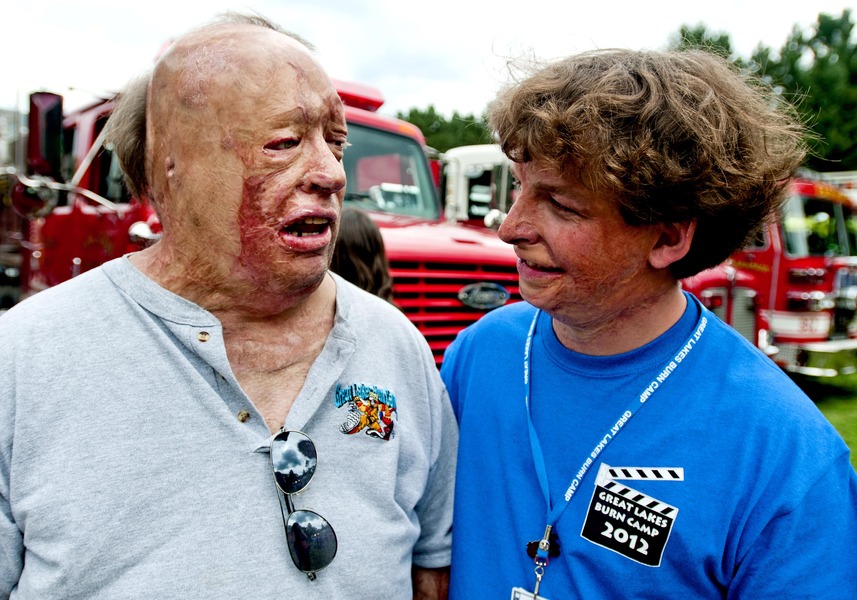 Klavon catches up with burn survivor and former camper turned counselor Lee Eicher, 27, of Colon, MI, during the welcome procession at Great Lakes Burn Camp. Klavon started Great Lakes Burn Camp in the 90's to help young burn survivors find the strength to live in their new bodies. Eicher was a camper during the first few years of GLBC in the late 90's and remembers Klavon as one of his counselors. 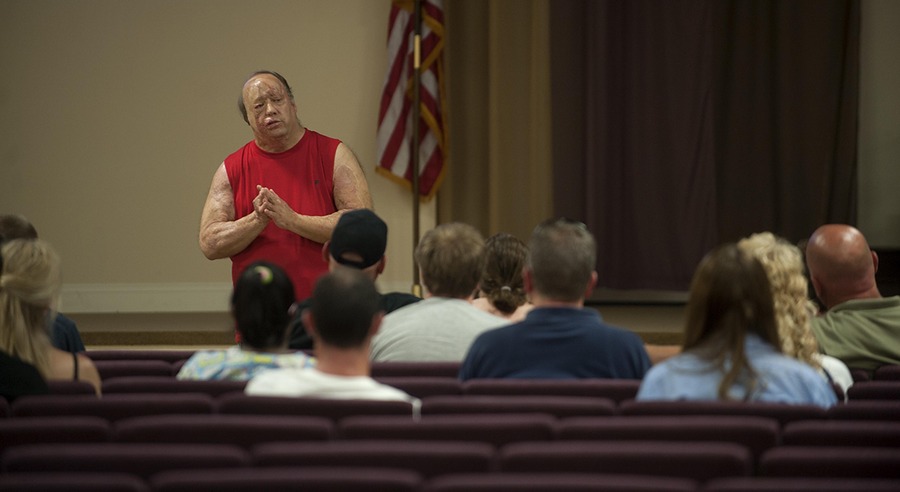 Klavon shares his story with a group of first-time offender drunk drivers at Village Hope Church on Cooper St. on Thursday June 28. "I've done this so many times, but I still get a little nervous," Klavon said. "Every time I share my story, it's still hard." 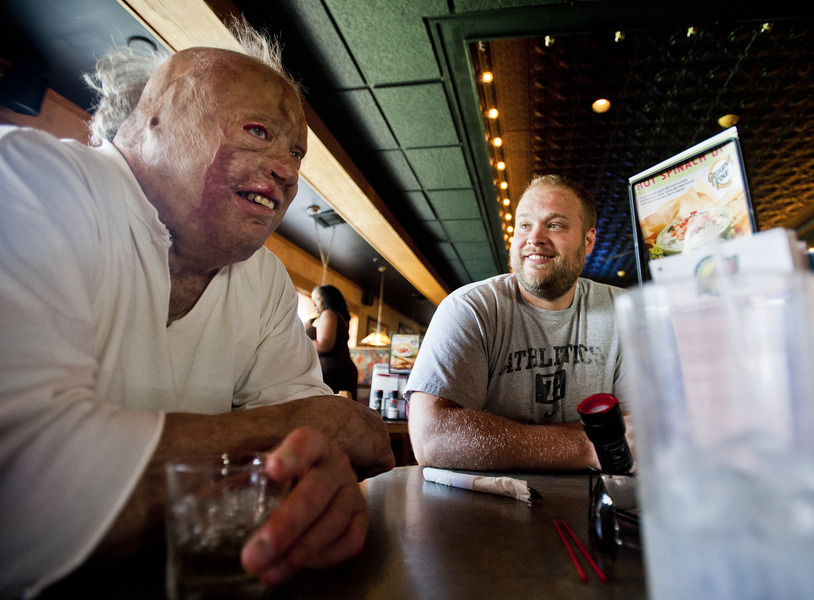 Klavon eats a father's day meal with his second oldest son, Corey, left. At the time of the crash, Corey, 8, and his older brother Allen, 9, pulled their unconscious sister Erin, 4, from the burning vehicle, saving her life. Corey and Allen were the only passengers of the vehicle not injured in the crash. 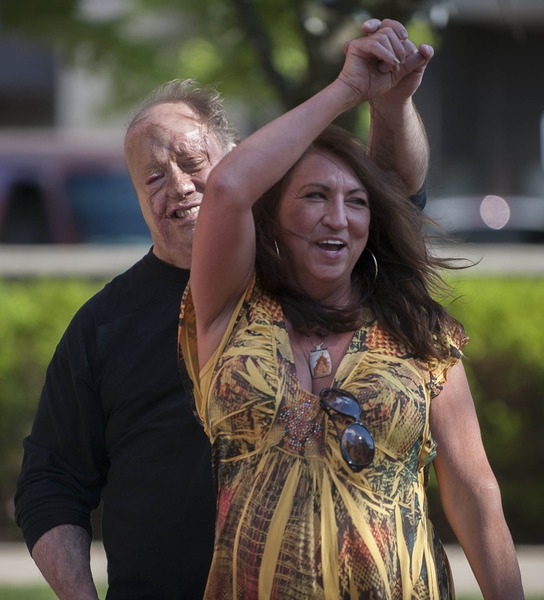 Klavon danced with new friend Carly Bernard during a fast song at the first Jammin' in Jackson concert event of the season on June 7. Klavon considers himself a ladies man through and through. 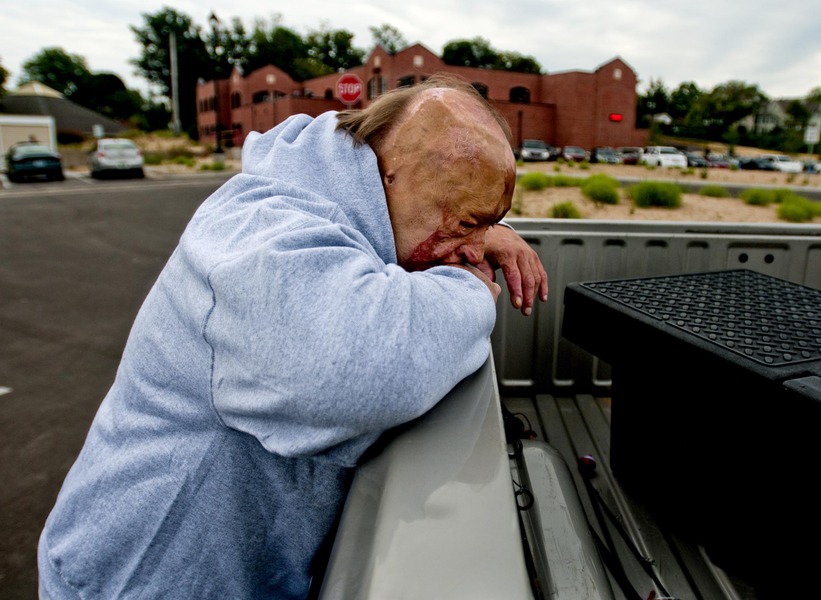 Klavon rests against the side of his daughter Erin Klavon's truck after a long day at Great Lakes Burn Camp. It had been five years since Klavon, it's founder, had stepped foot on the grounds of the camp. "I think it bothers Dad that he's not so involved anymore," Erin said. "But he loves the place anyway. I think he's just happy he can help kids like him." 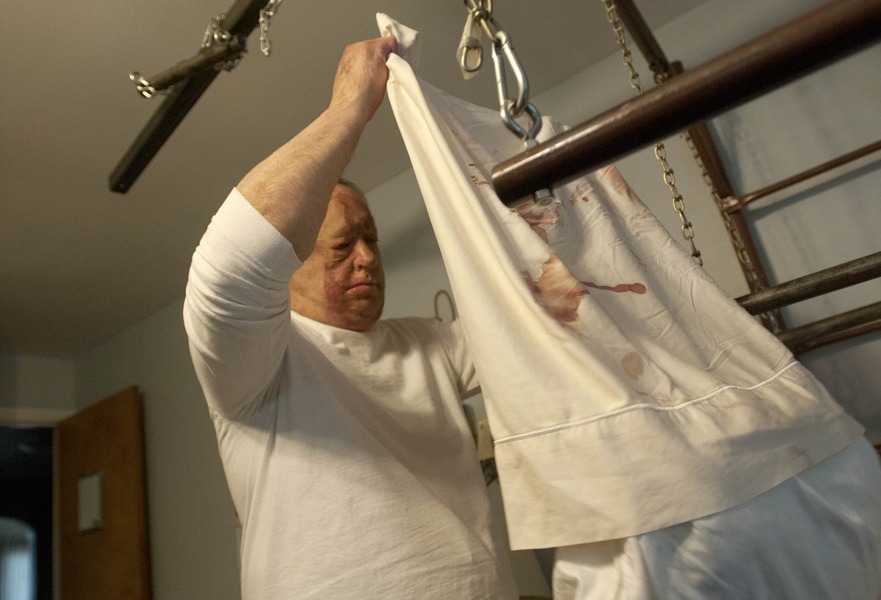 Klavon changes the bloody bedding from his father Walter's bed after wounds from a difficult oral surgery tore open in the middle of the night. He cares for Walter every day, cooking him three balanced meals a day. “I was 13 years old at the time, so I was thrust into the position of being the man of the house,” Klavon said. “So I’ve been taking care of the home here for many years.” 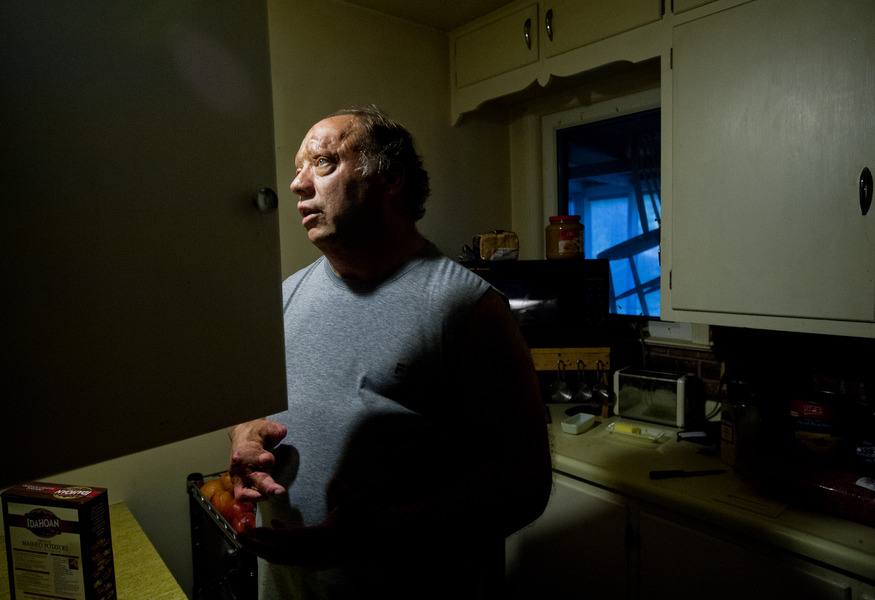 Every day, Klavon cooks Walter three square meals. "Sometimes I'll even go out and get him a big breakfast from McDonalds," Klavon said. "It's a big treat for him." 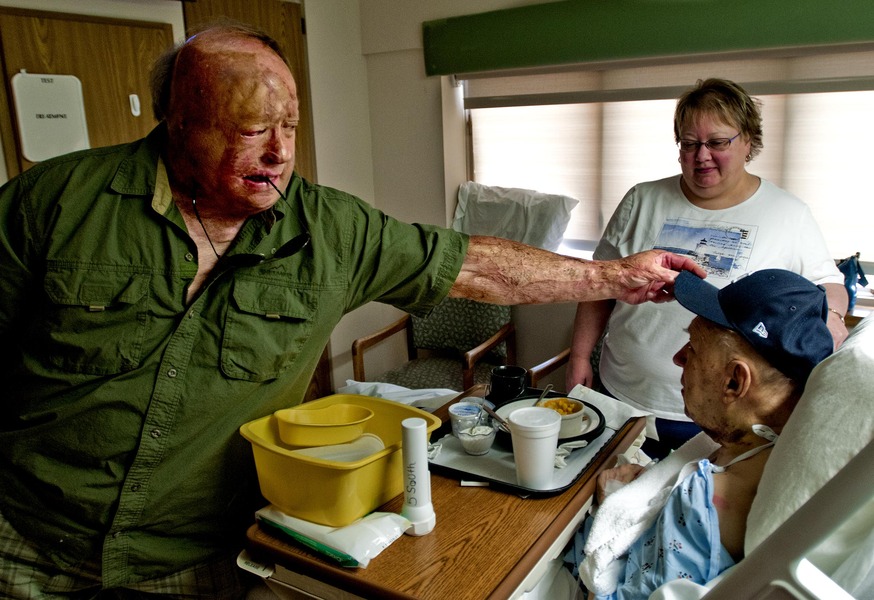 Klavon places his father's favorite Detroit Tigers hat on his head during a visit to Allegiance Health Center where Walter was recovering from excessive blood loss after oral surgery. Walter died on January 13, 2014. 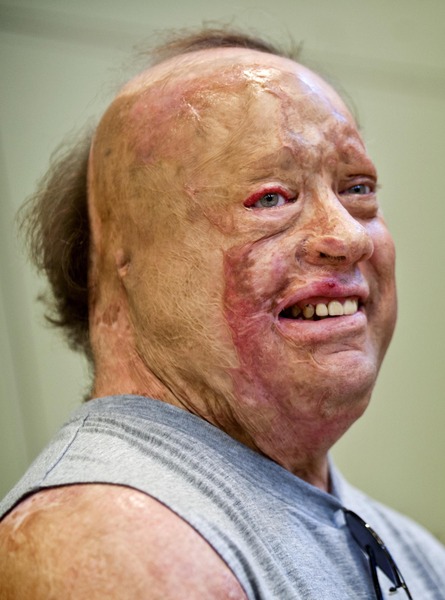 Despite all Klavon has endured, he maintains a positive outlook in life and tries to pass that message on to those he meets. "It's really important to be happy with yourself and to help others when and where you can," Klavon said. “I do know that everything happens for a reason; the only thing you can control is how you think and react to things in life.”