96 Minutes tells the story of Jaime DeVries, Daniel Gonzalez and their son Alejandro Lupe Gonzalez, a baby boy born on January 30, 2015. Alejandro lived for only 96 minutes in his parents arms before succumbing to a congenital heart defect, Hypoplastic Left Heart Syndrome. 96 Minutes tells the story of a blended family's struggle to survive the earth-shattering tragedy of an infant's death and how they remember him to this day.

96 Minutes was published as a two part series on the front cover of the Billings Gazette in Billings, MT, on Sunday April 19th and Monday April 20th of 2015. Potes found the story and brought it to the Gazette in December of 2014 and followed Jaime, Daniel and their children until they laid Alejandro to rest a week after his birth.

Potes wrote a first-hand account of the night of Alejandro's birth and death that ran A1 in Sunday's edition. To read it, please clickhere

"96 Minutes" won a Lee Enterprises President's Award for News in November of 2015. 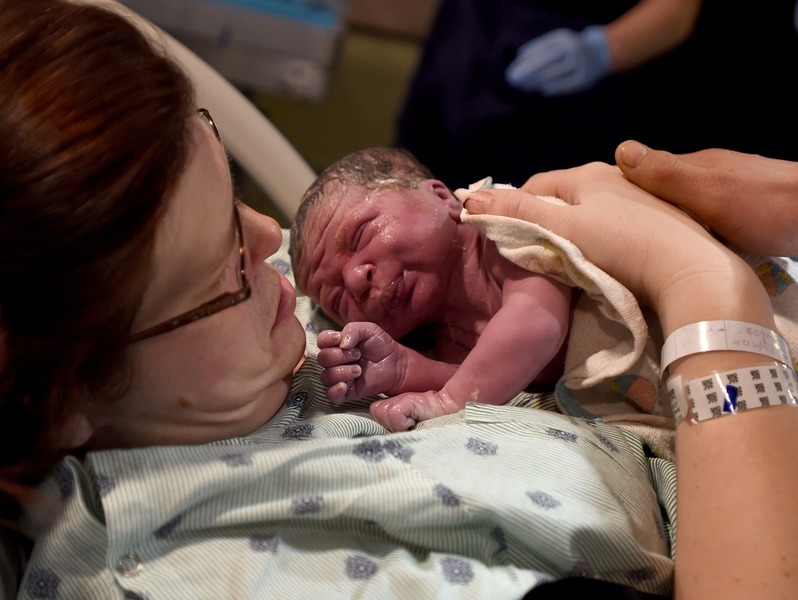 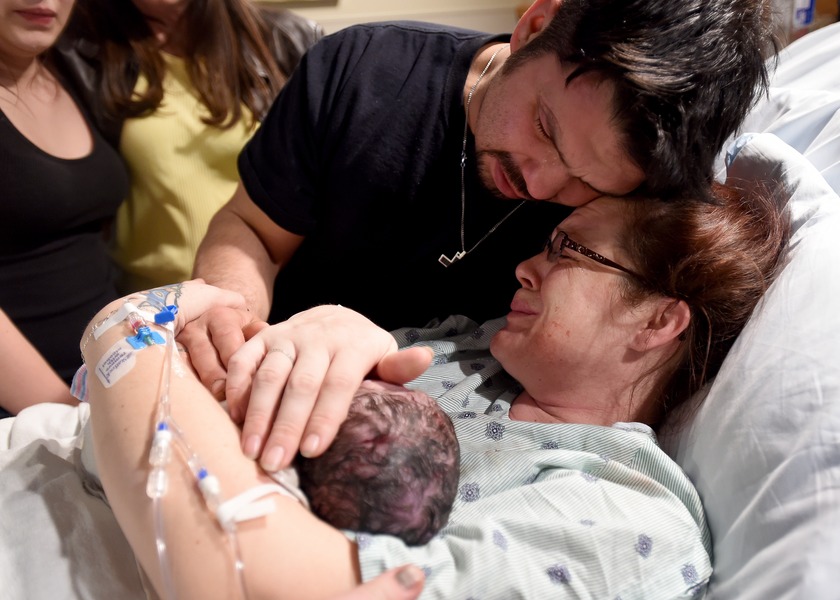 Daniel and Jaime shed tears together and hold their crying son close shortly after his birth. Daniel and Jaime consulted with specialists in Boston about surgery options, but the procedure was ruled too dangerous due to the presence of fluid in his lungs. If surgery had been possible, Alejandro would have been pulled from his mother's womb, rushed to surgery and mostly likely have died on the operating table. 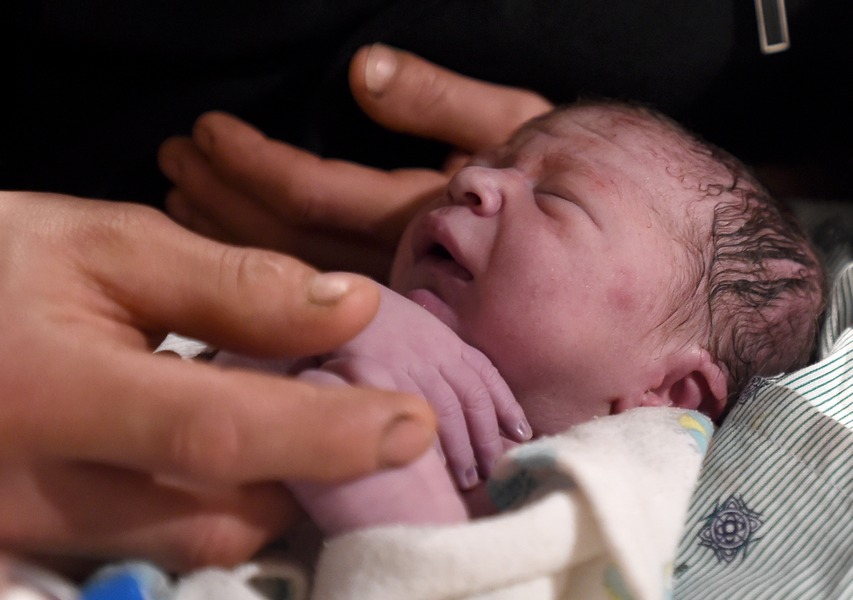 Daniel strokes the delicate, discolored skin of his son's hand as he whimpers softly. The fluid in Alejandro's lungs made it more and more difficult for him to draw breath. 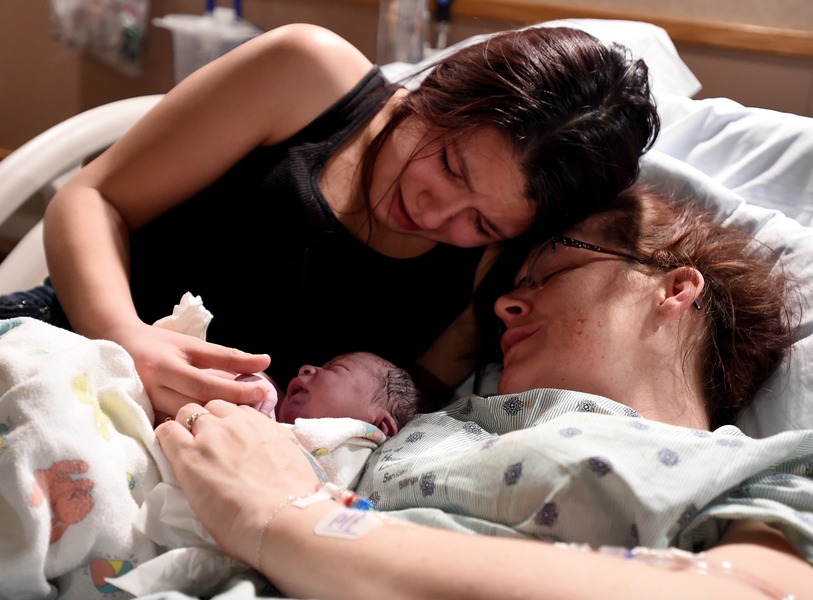 Jaime and Daniel's oldest daughter, Marcella, 13, hold Alejandro and cry together on their hospital bed. Jaime and Marcella developed an extremely close relationship during her year and a half long relationship with Daniel. "She's my rock," Jaime said. "She knew I would need her here, as painful as this will be." 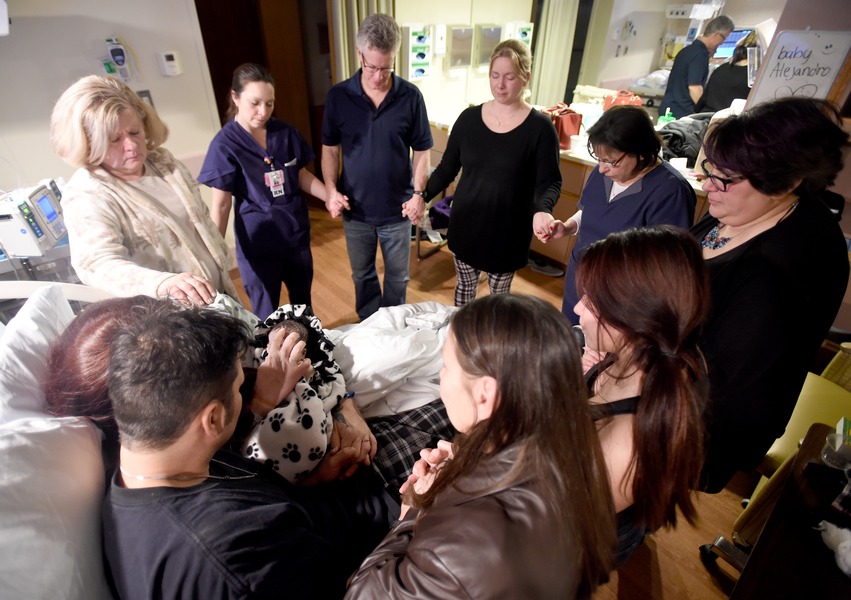 Daniel, Jaime, doctors, nurses and family members form a circle around Alejandro and pray for a miracle. Alejandro would pass away 12 minutes later. 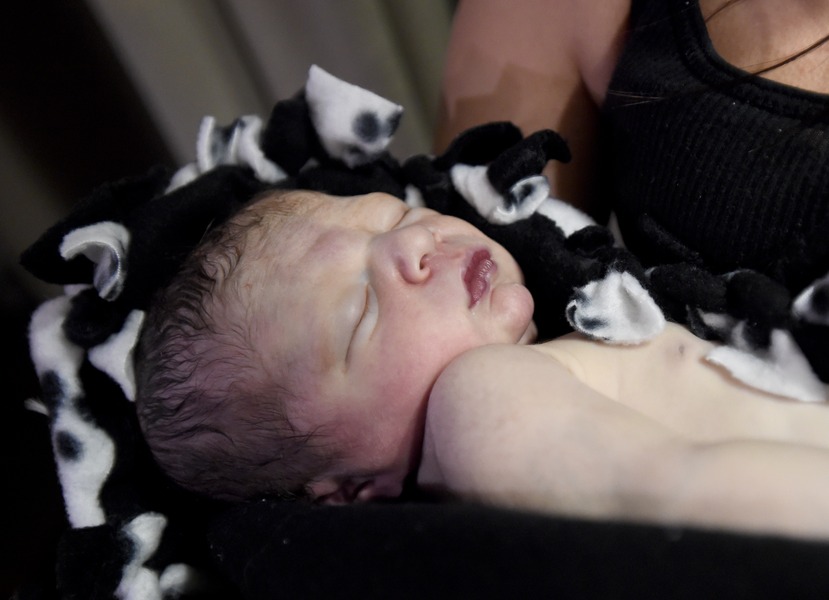 Marcella holds her little brother's body. He passed away at midnight on January 31, 2015. 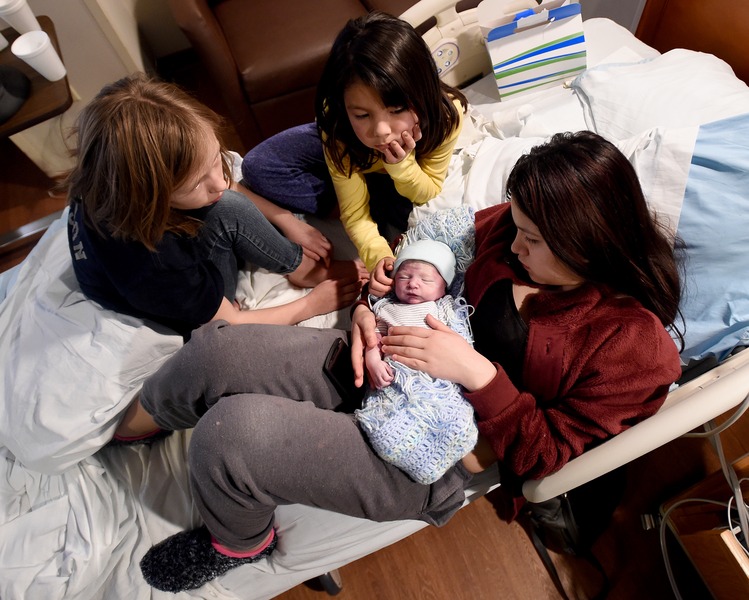 Daniel and Jaime's three daughters, Makayla O'Neill, 9, Valencia Gonzalez, 7, and Marcella, 13, sit silently with their little brother's body Saturday morning, only 9 hours after he passed away. Valencia touched her brother's face, quietly asking her sisters, "Why is he so cold?" 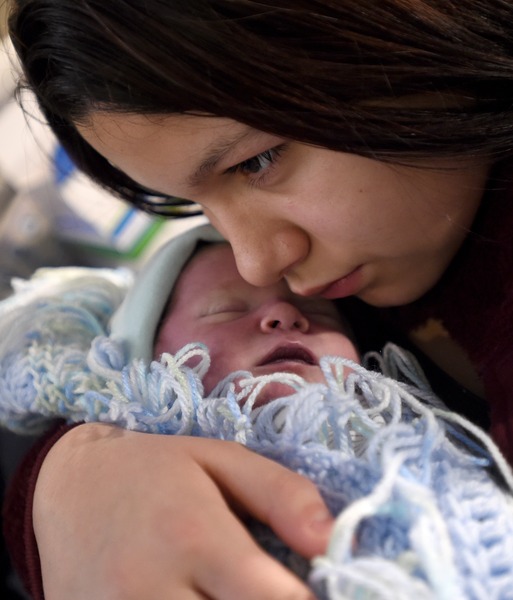 Marcella presses her face to her baby brother's the morning after his death. This was the last time Marcella held her brother's body. "It's just too hard," she said. "I was there when he was alive and I can't do it." 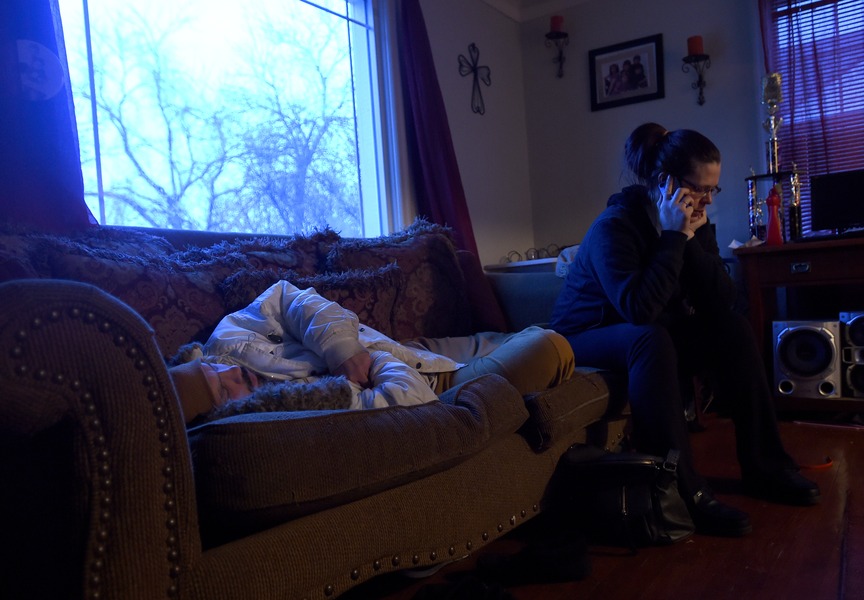 Jaime recounts the story of Alejandro's birth and death to a family member on the phone as Daniel naps on the couch next to her on Monday February 2, 2015. Jaime slept only a few hours a night in the weeks following her son's death. 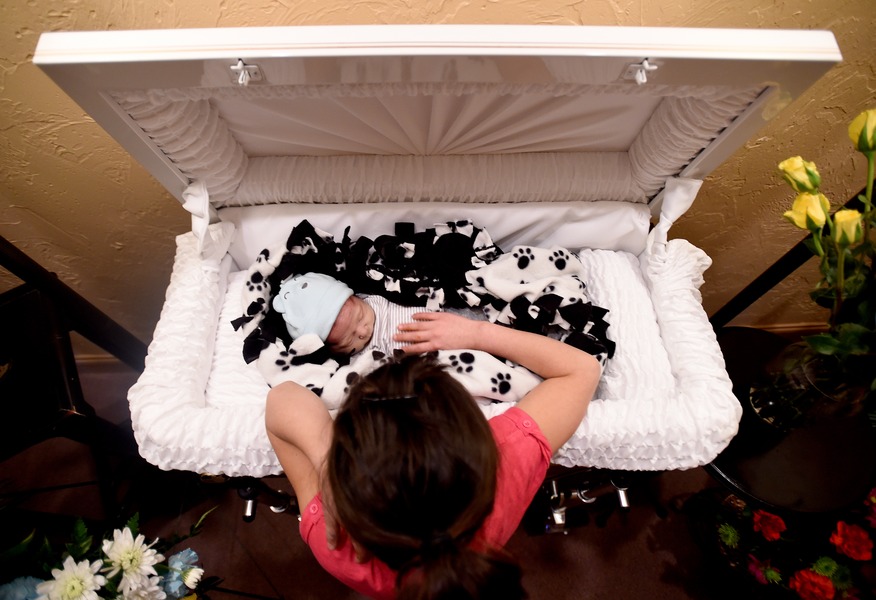 Big sister Valencia, 7, rests her hand on her brother Alejandro's chest during a viewing for friends and family on Thursday February 5, 2015. 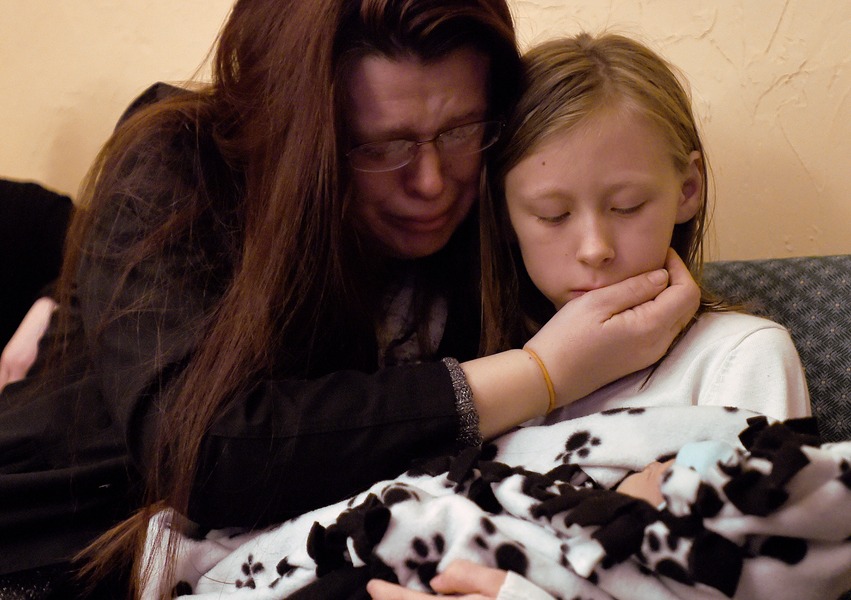 Jaime lets out a sob and touches her daughter Makayla's cheek as she holds her baby brother 30 minutes before his funeral.

Daniel shares a quiet moment alone with his son's body during a viewing for friends and family Thursday February 5, 2015

Alejandro's body rests inside a tiny infant casket the day before his funeral. He is dressed in a blue outfit and cap and wrapped in a homemade flannel blanket made by his big sister Makayla.

The family cries and holds each other as a song plays during Alejandro's funeral.

Valencia holds her father's hand and leads him and the other pallbearers, Daniel Gonzalez Sr., Dick DeVries, Little Daniel to his burial site. Alejandro's body was laid to rest on Friday February 6, 2015.

Two months after her son's death, Jaime cries and hugs Daniel after receiving a message from the mother of Cassie Lorenz, a 17-year-old girl who died of cancer in 2012, and the girl their baby is buried next to. Jaime left a note in a journal on Cassie's grave asking her to hold Alejandro in heaven. "Our baby's in good hands, I know that."

Jaime and Daniel smile as they listen to a sound recording from Alejandro's birth, the first time they've heard their son cry since his birth and death two months before.

Molds of Alejandro's hands and feet rest inside Daniel's home to this day, a daily reminder of their son's life.